Pearls were quite literally what put La Paz and Las Cruces on the map.  After the conquest of Mexico by Hernán Cortés which took place from 1519 to 1521 and as a result of rumors and legends of a mythical island which lay of the Pacific coast of New Spain, a series of exploratory expeditions were launched to find it.  The information was sketchy, compelling and tantalizing.  These rumors spoke of an island inhabited by amazon warriors who wore nothing but pearls.  From time to time these fearsome women would take men from the mainland as prisoners for the purpose of procreating and would then dispatch them to an early grave.  This tribe of women was ruled by a formidable queen named Calafia and she and her subjects were the object of intense interest and speculation by the newly arrived Spaniards.

One such expedition, undertaken by Fortún Jiménez de Bertandoña in 1533 aboard the sailing ship La Concepción, entered what is now known as the Bay of La Paz and encountered a group of natives living there.  They traded with them for pearls and got into serious trouble when they began forcibly having their way with the group´s women.  A massacre ensued, 20 of Jiménez’men were killed and their ship was burned.  Finally 18 survivors fled in one of their ship’s life boats eventually making it back to the mainland where news of California’s pearls quickly spread.

As a result, In 1535 Cortés himself entered the same bay which he named Santa Cruz and established a settlement.  The Spaniards began exploiting the oyster beds of pinctada mazatlanica for pearls and mother of pearl.  A bustling trade was soon under way as more and more oyster beds were located and plundered.  By 1736 worrisome reports from Jesuit Missionaries on the Peninsula were indicating a serious decline in the number and quality of the pearls being found.  The unequivocal signs of overexploitation of what was once thought to be an inexhaustible resource loomed large.

By the end of the 19th century pearling had evolved into a dying industry.  Fortunes had been made by local merchants and La Paz, which had become an important commercial sea port, was seeing an end to their bonanza.  Enter Gastón Vivés, the progressive mayor of La Paz, visionary aqua culturist and owner of Rancho Las Cruces at the time.  Vivés had developed technological innovations which allowed for the reproduction and cultivation of the oysters under controlled conditions.  This gave him a considerable advantage over his competitors who were still using the outdated practices which had led them all to this catastrophic state of affairs.  His enterprise was visionary but unfortunately misunderstood by everyone else and then the Mexican Revolution of 1910 erupted bringing an end to Vivés’ enterprise which was destroyed by the Revolutionary Army.  The ruined remnants of his dream can still be seen at San Gabriel on Espíritu Santo Island.

Pearls can still be found although their numbers are significantly diminished. Recent efforts to farm and culture them have met with success and are evident in various parts of the Sea of Cortés.  Their unique range of colors and hues have a niche in the world market and so it seems that part of the past which put us on the map indeed has a future. 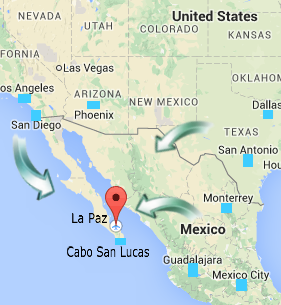